Call Us Today if You are a Business account with GEM or Ford Think Cars.  DCB has stock on  flooded, GEL and Lithium deep cycle batteries for GEM Car and Ford Think Car.
1999-2001 GEM Cars use the Flooded deep cycle batteries that are charged with the Zivan onboard 72v charger.
2003 and later model GEM Cars were factory issued with East Penn model Deka 8G31 GEL battery with the Polaris sticker.
After 2014 , Leoch Battery Corp was the OE battery for Polaris for the 48V model GEM Cars with sealed lead acid batteries.
Fortunately, DCB now has 72V and 48V  lithium iron phosphate (LFP) batteries that can be retrofitted into 2001 to current model GEM CARS. 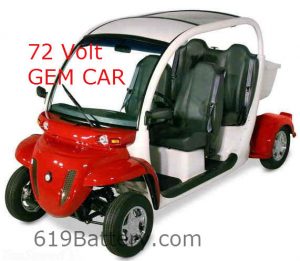 GEM Cars and Ford Thinks quickly discharge the battery pack if left off charge for more than ten days.  Some on board chargers like the early model Zivan will not maintain the batteries even when left plugged in. Same is true for the OE Ford Think on board charger. For Battery Maintenance Tips read step by step guide posted here.

A GEM Car battery is a 12 Volt deep cycle battery that is designed for the deep discharging and recharging cycles that a GEM Car requires.  Inexpensive marine batteries from Costco will not survive more than a few months under normal driving conditions. Only a 12 Volt battery group size 30 or 31 with 90 or more amp hours should be used. Battery group sizes 24 and 27 are too small and do not have the capacity to continuously operate the GEM Car.

Pros and Cons with Flooded and GEL GEM Car Batteries

2001-2002 Model GEM Cars use the two battery 72V LFP kit connected in parallel. One battery rests in the hood and the second battery is installed under drivers seat.
2003 and later 72V models will have both 72V LFP batteries under seat.
72V Lithium battery kit Price (Click Here) 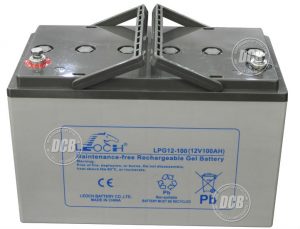 Naturally, most GEM car owners want the longest lasting and longest range battery available for their GEM.  In some cases, we have heard of GEM owners repurposing Chevy Volt and Nissan Leaf lithium ion batteries for their GEM. It is true that in the comparison of traditional lead acid battery and a lithium battery for less weight, longest range and highest cycle rate, clearly the lithium battery is superior. Replacing heavy lead acid batteries with lithium iron phosphate is now available with drop in replacement batteries. Each 12v battery has a built in BMS for protection and can be connected in series to create 72 volts for GEM car.

Now in stock, lithium battery replacement for lead acid batteries. The BigBattery LFP two battery kit is a safe alternative to power your GEM Car (and Ford Think). Each battery is 72V and connected together in parallel.
Price for 72V Kit $2869 plus tax, w/ lead acid core.
Install Available for $300

Installed under seat with charger

Most Delta Q chargers have a programmable charging algorithm.  If you opt for a different battery chemistry you will need to adjust charger to match.  Example, a GEM Car that has 12 Volt GEL Deep Cycle Battery from Deka must have the GEL battery profile selected. Same is true for flooded GEM Car batteries.
You can use a YouTube video guide to help you change the onboard charger profile.
**Note GEL and AGM are Not the same charging profile

GEM Car OE flooded battery back in 2000 was the Trojan battery part number 30XHS.  It is a flooded 12 volt deep cycle battery with 130Ah of power. We advise replacing the 30XHS with the US Battery part number 31DCXC for the same voltage and power but better results.
2003 to 2011 72 volt GEM Car models were equipped with 12 volt Deka Gel bttery part number 8G31.  Six seater GEM Cars use nine 8 volt GEL batteries by Deka part number 8G8VGC.
2015 and newer GEM models are 48 volt systems powered by Leoch DTA6224 battery.  This battery is in stock at Deep Cycle Battery San Diego and has a part number of Leoch LDC6-224

12 volt US Battery 31DCXC 130 amp hour GEM Car Deep Cycle Battery for GEM Cars that are equipped with six 12 volt batteries.  This model GEM will have four under the seat and two in the hood. The onboard charger is a Zivan. 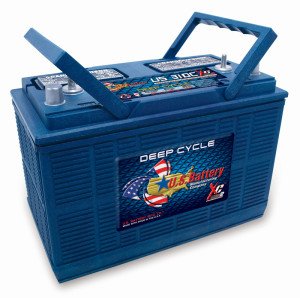 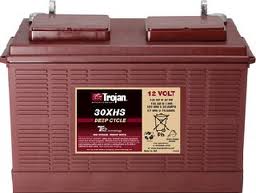 New Trojan 30XHS Battery Price (Click Here for Pricing) with exchange. 12 Volt 130 amp hour rated: This battery is the first battery used by GEM Car as OE.  In our opinion, it is no longer the battery of choice for Gem Car application. *(Cores are required to void core charge of $20) Local Delivery is Available in San Diego .
Delivery Also Available to San Clemente, Dana Point, Orange County Area for additional fee

Notes on Trojan 30XHS: We have 25% warranty claims for the 30XHS in Gem Car application. Consistent charging and watering is required for this marine style battery 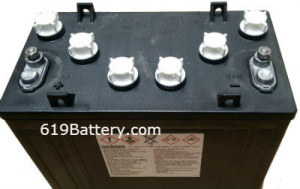 Flooded Gem Car Battery with 140 amp hours
*Price for 12 volt Trojan Black OEM Battery for Gem Car Battery Replacement: (click here for unit pricing)
(Cores are required to void core charge of $30) Note, it is taller and is more difficult to install.. Additionally, the factory battery hold down hardware will not work.  You must make changes to the battery hold down hardware as it as must to keep batteries secure!

48 volt and 72 volt GEM Cars have six to eight to nine lead acid batteries.  GEL, AGM and flooded are all lead acid type batteries. Each battery is connected in series so voltage is additive and amperage remains constant. Cable gauge for GEM car is #2 standed 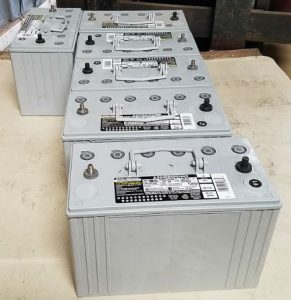 OE Battery for GEM Car
Deka GEL GEM Car Batteries will come from Polaris with GEM stickers.  Six 12 Volt 98 Ah batteries connected in series will create 72 volts but remain at 98Ah.
Part number 8G31 is mfg by Deka in Pennsylvania and is 98 amp hour rated: This battery is the factory replacement gel battery for GEM Car. It is a powerful deep cycle battery with centered studs for direct replacement. Deka is mfg by East Penn and made in the USA.  The battery handles make it easier to install.  Note the factory Dominator label is not included to save you money.*New Deka GEM Car GEL Battery for Sale: (click here for pricing) with core  *(Cores are required to void core charge of $20) Local Delivery is Available in San Diego.
Delivery Also Available to San Clemente, Dana Point, Orange County Area for additional  fee 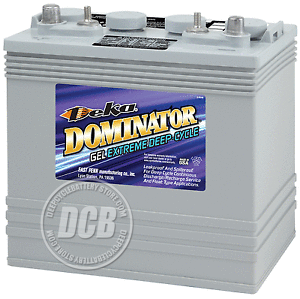 GEM Car Six Passenger 8 Volt Battery Price $399 ea
Use the Deka Gel chemistry deep cycle battery if your E6 Gem has the OE Delta Q charger onboard. If the charger fails or if you already upgraded to the Ride for Fun or Bullet Proof, we advise using the less expensive but very reliable Leoch AGM chemistry 8 V battery instead.

All Prices are plus tax and with exchange for old batteries.

What is the difference between AGM batteries and Gel batteries?

Today’s high cycling AGM batteries are less expensive than gel and maintenance free.  It is necessary to have the correct or best charger for any battery you use.

If you live in a hot climate area like Arizona, GEL chemistry GEM Car batteries will endure the heat better than AGM.

We recommend not using the OE Zivan onboard charger when it comes time to purchase another charger.  Delta Q and Quick Charge brands perform well.

What is GEM Car Battery Reconditioning?

If a GEM battery is left in a discharged state it will become resistant to most battery chargers.
Often the onboard charger will not operate because the battery pack voltage is too low for the charger to detect.

Deep Cycle Battery San Diego has a battery desulfation charger that has the ability to return the lead sulfite from the plates to the electrolyte.  The process can take 24-48 hours depending on the condition of the battery.  Flooded cell GEM batteries that have been dry for 30 days or more and not a candidate.
AGM and GEL GEM car batteries left in the GEM off charge from more than nine months are not likely to be recovered.
We will do the battery reconditioning at your secure location.  Normal fee for this service is $200

Batteries for GEM Car We Do Not Recommend

Based upon field observation and premature failure we do not recommend using any marine or dual purpose deep cycle batteries for the GEM.  Yes they are less expensive but the will not sustain the high cycling demand of the GEM Car.
Interstate AGM batteries are Thin Plate Pure Lead and are great for cranking and some light cycling duty but do not survive the deep cycles from the GEM.

GEM cars are used by local, state and national government agencies, resorts, master-planned communities, universities, medical and corporate campuses, as well as by sports teams, taxi-shuttle services and individual consumers. There has been over 45,000 GEM Car’s produced since 1998.

Q: Which batteries are best for Gem Car?

A: The discussion has many opinions but the decision is based upon if you don’t mind monthly hydration required by flooded cell batteries.  Trojan 30XHS, US31DCXC

Are flooded cell type and will consume water when the batteries are recharged.

Two batteries in the front hood and four under drivers seat.

A Gel deep cycle battery will cost more and should be 12V Group 31 with 98 ah or higher.

An AGM deep cycle battery has good lifecycle and is sealed so no watering required.

Do not use UPS style AGM batteries. UPS AGM batteries are less expensive but are not designed to discharge the recharge hundreds of times like deep cycle AGM are.

Q: Where is the GEM Car charger located?

A: Inside the dash next the GE controller

Q: Why won’t the batteries stay charged when car is left plugged in?

A: The early model GEM Cars used Zivan and the charger will complete one charge cycle and shut off regardless if left plugged in. Zivan will not maintain the batteries.

Unless you unplug and replug in the car to restart the Zivan on-board charger, the battery state of charge rapidly decreased.

After five days, the car has drained the batteries to 75% state of charge.

Undercharged batteries are a major cause of system failures in GEM Cars.

Deficit Charge is a charge cycle in which less charge is returned to a battery bank than what was withdrawn from driving the GEM Car. Deficit charge can occur in situations where AC power supply is poor due to oversharing the 110 AC outlet with the GEM  or if the extension cord is too long and undersized.

If the flooded / AGM or Gel Gem Car batteries experience repeated deficit charge cycles and are left in a partial state of charge for long periods, they will become progressively more difficult to charge and suffer a loss of capacity. When charged, voltage will rise more quickly in batteries with sulfation than in normal batteries, falsely indicating a high state of charge. The Delta Q and Zivan charger will falsely report 100% state of charge when the batteries have not been fully charged. Recovery from this condition can sometimes be accomplished by an equalization charge.