Call Zivan in Sacramento to Repair Your Zivan onboard Charger.

If you own a Gem Car, you probably noticed that the six batteries lose charge fast, even when the car is not being used.  This is because the GEM  has a nasty parasitic draw that can be remedied by using the master kill switch when not being used.  However, the best thing to do to fight the draw is to charge the car every day even when not being driven.  If neither technique is used, the batteries will discharge and sit in a low state of charge.  Then the batteries will become resistant to any attempt to charge with the on-board charger and you will see or hear an error message displayed by the Zivan or Delta Q GEM charger.

Diving deeper,  because the six (or nine) GEM batteries are wired in series to create 72 volts, top balancing the batteries is almost impossible.  As batteries wired in series charge and discharge, the individual batteries will be at a different states of charge.  Over time, one or two cells will drop out (detected by a hydrometer if a wet cell battery) resulting in low driving range.  If the unbalanced battery situation is fixed soon enough, the GEM Car battery life can be extended.

To be energy efficient, Delta Q and Zivan are a type of battery charger referred to as “high frequency” or “switch mode” battery chargers that will struggle to fully charge the GEM batteries when they get hot.  Deep cycle batteries used by the GEM have internal resistance and will get warm to hot when being charged.  As the high frequency charger warms us from charging , we can see its efficiency decrease to 50% output dropping the charging current from 12 amps to 6 amps.
An example of a GEM battery, size 31 deep cycle battery with 130 amp hours. At 50% DOD (depth of discharge) there are 65 amps that need to be charged at 110% divided by 12 amps from the charger but now only 6 amps when efficiency drops. 65 amps * 110% = 71.5 amp / 6 amps from charger.
It will take twelve hours to re-charge your deep cycle batteries. You MUST allow two to three hours to cool after charge before using GEM or major damage occurs to batteries.  The example is for traditional flooded deep cycle batteries. GEL and AGM battery chemistry will re-charge faster.  A 72 volt Lithium battery pack would recharge the quickest and have the most battery life-cycles compared to lead acid.

High frequency chargers have a time out feature and can stop charging before the batteries have reached a full state of charge.  When this happens, the LED light on the dash will turn green even though  the batteries are not 100% charged.
If you own a EZRED battery hydrometer, pop the cap off one of the flooded battery cells and measure the specific gravity. You may be surprised to see a partially charged battery when the LED is green.
If the batteries are AGM or GEL, the testing is performed by a battery load tester (do not rely on an algorithm based tester).

Quick Charge and Dual Pro battery chargers are an alternative to high frequency charging.  Both charge batteries with higher constant current that will saturate the lead acid (GEL and AGM are lead acid) with charge resulting in higher specific gravity.
When the Dual Pro or Quick Charge get hot, their efficiency drop is aprox 5%.
72 volt 10 amp and 72 volt 20 amp chargers are available by both companies.

The OE Zivan brand on-board charger will not maintain the batteries full state of charge even if left plugged in.  The Zivan will only complete one charge cycle and shut down when batteries are either fully charged or when the charger times regardless of current state of charge. We have visited a GEM car that had a Zivan charger left plugged in and the individual battery voltage was 10.5 volt each (100% discharged).

What is Gem Car Battery Range?

How to Best Charge GEM Batteries

We think the best method to charge a GEM battery pack with six 12 volt lead acid (Gel, AGM or Flooded) is to use a six bank, 12 volt 10 amp battery charger.  Each battery is individually charged and balanced.  The six station charger has separate LED lights for each battery, indicating if the battery is partially charged or fully charged. 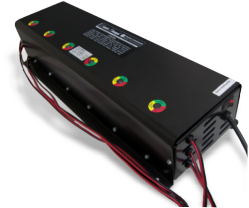 The charger is stationary and weighs 25 lbs.

The Way it Works

Connect each lead or pig tail to every battery terminal. The anderson SB50 plug is attached to every lead and is used to connect the charger when it is time to charge the GEM batteries individually.
The six station charger plugs into a standard 110-volt outlet. It takes approximately six to eight hours to recharge a GEM® car from a 50% discharged state.
Yes this method is less convenient that using the series style charging.  But, if you want the best life for your battery investment, both battery manufactures and ourselves feel this is the best method to re-charge  your GEM batteries.

Local installation labor is $75 with Purchase

Here is Guide for GEM Car Battery Maintenance and Charging

1) Recharge vehicle after each use.
2) Check water level monthly (applies to ‘Flooded’ water‐based batteries only, NOT GEL‐type).
Check water levels more frequent in warmer climates. Do not fill higher then bottom of
neck opening of battery cell.
3) Charge batteries before adding water unless plates are exposed and then add only enough water to cover plates. Once batteries are charged, add distilled water to bottom of neck opening.
4) Battery posts must be clean and cable connections tight. Clean posts with baking soda and water. Verify torque to cable connections (follow procedures in Service Manual).
5) When storing or parking vehicle for extended periods of time, two weeks or longer, it is strongly recommended that you first charge vehicle to 100%, then turn the “Master Disconnect Switch” (MDS), located under the bench seat for 2004‐older Model vehicles and inside Access Panel of lower dash for 2005‐current Model vehicles, to the “OFF” position.
Newer GEM (09 & Up) Vehicles equipped with Delta‐Q brand charger may leave the MDS “ON” as it will turn on automatically and recharge batteries, once every 7 days for flooded batteries and once every 14 days for GEL batteries, for 26 consecutive cycles as long as the AC line power is not interrupted.
6) “Self” discharge rate of a battery is about 1% per day, anywhere from 40‐100mA, depending on model year vehicle. Battery charge should be refreshed about every 2‐3 weeks.
7) The MDS must be in the “ON” position for charger to operate and charge batteries.
8) Do not charge a frozen battery. Charged batteries do not freeze.

www.619Battery.com (619) 448-LEAD (5323)
DEEP CYCLE BATTERY SAN DIEGO
GEM Car Battery Maintenance Guide
The GEM on‐board charger is a 12‐amp, 72‐volt charger. There is a safety feature built into the charger that will not allow it to come on if the batteries are overly discharged. This safety feature is activated when the charger detects that the combined voltage of all batteries is 68 volts or less.
ON‐BOARD CHARGER WON’T COME ON
If the string voltage is below the 68‐volt threshold and the on‐board charger will not activate, it then becomes necessary to employ an alternate charging method.
ALTERNATE CHARGE METHOD WARNING!
Always were safety glasses or approved eye protection when servicing batteries. Battery gas is flammable and explosive. Charge batteries only in a asdfwell ventilated area. Keep flame or sparks away from the battery or any other booster source with an output greater than 12 volts. Do not allow battery fluid to contact eyes, skin or clothing. If acid splashes in eyes or on the skin, flush the area immediately with large amounts of water.
CAUTION!
Batteries can be permanently damaged (and the warranty voided) if they are allowed to sit for an extended period of time at very low charge. A fully charged GEM with the Master Disconnect Switch (MDS) on, and not in operation for two weeks or longer will self discharge to a point that the on‐board charger will not operate. If the GEM is not going to be used within a two‐week period it is recommended that you fully charge the vehicle and turn off the MDS. It is also
recommended that after this period the vehicle be recharged again before use to optimize battery capacity for best vehicle performance. The information listed below will explain how to get the correct amount of voltage into the batteries so that the on‐board charger will activate. There may be damage to the batteries due to the fact they had sat for extended periods of time
at low voltage resulting in poor performance and loss of desired range.
www.619Battery.com (619) 448-LEAD (5323) DEEP CYCLE BATTERY SAN DIEGO

Patience and extensive charging may help to recover and recycle some batteries as long as the cells were not dry or have any internal shorted cells.
To ensure the alternate charging method is done correctly follow these steps:
1. Locate the Master Disconnect Switch, under the bench seat (2004‐older) or inside the fuse access panel (2005‐current), depending on model year GEM, and turn it to the off position.
2. You will need to obtain a standard 12‐volt automotive type battery charger. Set the amps to medium (10 to 30‐amp).
3. Hook the cable clamps from the off‐board charger directly to the battery posts, black to black (negative) and red to red (positive), one battery at a time. It is NOT necessary to remove or unhook battery post/cable connections as long as the MDS is off.
4. Charge each battery 10 ‐ 20 minutes each. This is only a residual charge that is being put into the battery and will dissipate in a short period of time. It may be necessary to charge upwards of 1‐2 hours per battery if they are significantly discharged. One concern to keep in mind is that, as you get to and finish charging the last battery, the
first couple of batteries charged will have had time to dissipate their residual charge. You may need to give the first two batteries a quick refresher charge. It may be necessary to repeat this step.
5. After charging the last battery, remove the 12‐volt charger cables from the battery, and turn on the MDS. The batteries should be above the 68‐volt minimum level and the built‐in on‐board charger should operate flawlessly.
6. Plug the extension cord into the vehicle and let the on‐board charger engage and finish the charging cycle.
7. You may need to repeat steps 1‐6 depending on the state of charge of the batteries in the vehicle.
www.619Battery.com (619) 448-LEAD (5323) DEEP CYCLE BATTERY SAN DIEGO