How do you choose the correct marine battery if you know nothing about what the differences are between deep cycle batteries and starting batteries?

On average, the most common boat battery or marine battery, is a dual purpose “deep cycle and engine starting battery” for lack of space on-board to hold the battery. However, best results happen when a boat has a dedicated battery with adequate cranking amps to fire the motor and a deep cycle battery to power the electrical components. Marine Starting Batteries A boat engine battery has cranking amps measure by it MCA (marine cranking amps) or just CA (cranking amps) always listed on the marine battery label.  To prevent engine damage, first check your engine’s manual for its recommended MCA/CA rating before selecting a marine starting battery.  Always choose a battery with a rating equal to or greater than the engine’s recommended MCA/CA rating. Deep Cycle Marine Batteries The highest cycling house marine battery is two (or four or more..) 6 volt batteries connected in series/parallel.  But because typical 6 volt batteries weigh 60 + lbs, most small power boats use a 12 volt deep cycle battery for “house” power. Trolling motors, fish finding electronics, live wells, etc sip power at a slower rate for extended periods. Batteries that power them usually aren’t recharged until the end of the day. These deep discharges are hard on battery plates, so deep-cycle batteries have fewer yet thicker lead plates than cranking batteries and are built to withstand deep cycling. A deep-cycle battery’s reserve capacity (RC) rating indicates how long it can carry a specific load before failing. The higher the RC number, the longer the battery will power a boats accessories. Typically, a deep-cycle battery will have two or three times the RC of a cranking battery. A deep-cycle battery also can withstand several hundred discharge/recharge cycles, while a cranking battery is never designed to be totally discharged.

Flooded marine batteries require maintenance and are the most common.  Batteries rated as marine starting should never be used for anything but engine starting. Dual purposed batteries can do two jobs but for best performance, use a true deep cycle for electronics or house power.

Sealed AGM marine batteries charge faster than flooded and are cleaner in terms that the battery acid is immobilized in-between the battery plates. In addition, the sealed agm batteries are zero maintenance less vulnerable to damage from vibration. 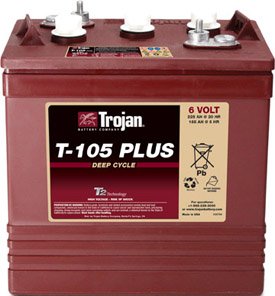